skip to main | skip to sidebar

Posted by Wastedpapiers at 3:18 AM 2 comments: 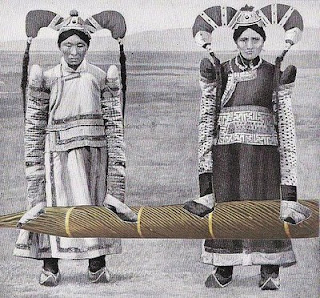 Deep in the Mongolian rain forests the locals are busy lifting the woven totem poles for the yearly Festival of Tum. The poles weigh about half a ton each and the outcome is severely stretched limbs as seen in this authentic photo realisation. Using mohogony poles and steel weavings has taken it's toll over the years and now plans are afoot to make the poles from lighter material. Customs and superstition are hard to overcome though and the elders are reluctant to give the new proposals their blessing for fear of angering the Totem Pole spirits.
Posted by Wastedpapiers at 6:53 AM No comments:

The Mail Art That Wouldn't Die

Meanwhile , down at the inconvenience store Mrs. Trubpole was stacking her Spam tins in the window in a kind of lop-sided ziggerat to attract more customers, or so she thought. He left eye twitched spasmodically in time with the ticking cuckoo clock on the wall behind her. The last tin was placed on the pinnacle of Spamness. An audible gasp issued from her wrinkly mauve lips. She stood back to admire her handiwork and a fly buzzed past he left ear and settled in the tippy-top of the topmost can- it wobbled, and before she could bat a green eyelid the whole thing came crashing down around her ankles.

Later she was seen stickig up long curling twirls of sticky fly paper to get her revenge. She stood on tip toe on the top rung of the rickety step ladder and pushed in the last thumb tack which held the fly paper. The steps wobbled, a fly buzzed past her left ear and settled on the end of her purple nose. She attempted to brush it away with the box of thumb tacks she held in her left hand , forgetting the ladder was only balanced on one leg. The whole thing came crashing down and Mrs. Trubpole landing on the box of tacks and the steps landed on top of her. A mighty scream rent the air and all the sticky fly papers got twizzled in the gust of air and came spiralling down onto her big red angry face.
Posted by Wastedpapiers at 5:14 AM 1 comment:

Wastedpapiers
I grew up in the home counties around London during the 50's and 60's. Went to several art schools including Southend ,Chelsea and Manchester. Trained as a painter and printmaker but now mostly using collage. Collect novelty songs and old mail art amongst other things too numerous to mention.